The company was originally set up in 1918 by Arthur Spriggs. 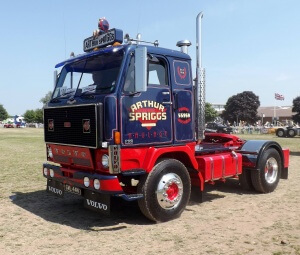 He had only one lorry a Thames Trader which he used for removals, transporting locally produced leather and collecting coal from the railways in and around Northamptonshire (see pictures). The business was based in Higham Ferrers which is a small market town close to Rushden in Northamptonshire.

Arthur had six children his plan was for his sons Derek & Billy to join the business when they were old enough. Sadly Billy who was a Squadron Leader in the British Air Force was killed in the Second World War.

Derek with the help of his wife Jean started to expand the business in the late 1950’s. Jean was doing the accounts, while raising their 5 boys. The main bulk of the work was in and around the Rushden area.

As the business grew In the early 1990’s a depot was set up in Gloucestershire and headed up by Christopher the youngest of Derek’s Sons and whilst initially based in Quedgeley Gloucester rapidly out grew this site and purchased Cowfield Mill in Tewkesbury in 2009 where the company is based today and managed by Chris and his team.

Just fill in the form below...

Arthur Spriggs & Sons ltd have proudly invested in youth sport for many years and are committed to encouraging young people into enjoyin MORE...